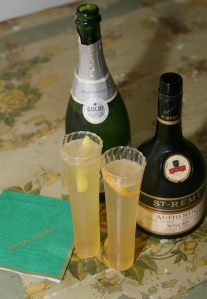 It is S.A.T.U.R.D.A.Y! Get your cocktail on! I enjoyed this a couple of weeks ago with The Yelles at the lively Oak Long Bar at the Fairmont Hotel, Boston. I inquired about the seemingly odd name and quickly received an education of its history from our brainiac bartender. The cocktail pays homage to two powerful French icons – guns and champagne. The French 75mm field gun was a powerful weapon in WWI and the American soldiers were impressed with its power in battle. Adding a bit of muscle to solo champagne, the soldiers mixed in Brandy. Thirst Quenched. The cocktail evolved further when the American soldiers returned to the USofA and aptly named it to honor the allies. And now I present The French 75!