I had a special pajama clad helper in the kitchen one Sunday morning recently. No makeup, hair unbrushed…but it was magically delicious! I always thought these “elephant ears” were a short cut from a French pastry. Contrarily, my research revealed that it’s adapted from the Native Americans’ “sweet fry bread”…Either way, it’s quick, delicious, and this little three year old did most of it on his own!
A job opportunity awaits!

Combine 1/2 cup of sugar and salt.
Pour it over a flat surface such as a wooden board.
Unfold the sheet of puff pastry onto the sugar mixture.

Combine 1/2 cup of sugar and the cinnamon.
Spread it evenly on the puff pastry.
(This is not about sprinkling, it’s about an even covering of sugar.)
With a rolling pin, lightly roll the dough until it’s a 13-inch square and the sugar is pressed into the puff pastry on top and bottom.
Fold the sides of the square toward the center so they go halfway to the middle.
Fold them again so the two folds meet in the middle.
Then fold one half over the other half as though closing a book.
You will have 6 layers.
Slice the dough into 3/8-inch slices.
Place the slices, cut side up, on baking sheets lined with parchment paper. 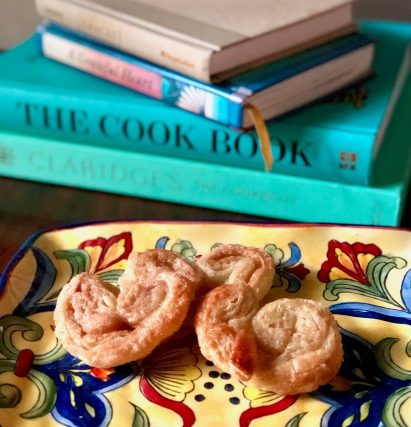