Cooking around the globe…my favorite passion! Last February we chased our culinary dreams (and a few very fine golf courses for the don!) to Vietnam. The darling gal pictured here was our guide throughout the charming town of Hoi An, their market, and the Red Bridge Cooking School. Sensory overload is a total understatement! 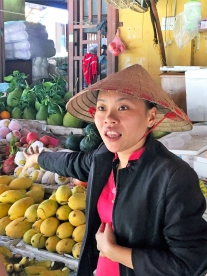 One easy take away was the Bánh Mì; that’s Vietnamese for bread, more specifically the baguette, which was introduced by the French during the colonial period in Vietnam. Unlike the traditional French baguette, the Vietnamese baguette is made with rice flour, making it airier. In Vietnamese cuisine, Bánh Mì is typically made into a sandwich, commonly including pickled daikon radishes, carrots, cucumber slices, cheeses and cold cuts of choice. I mixed it up a little bit here! But first, a couple of fun market images… 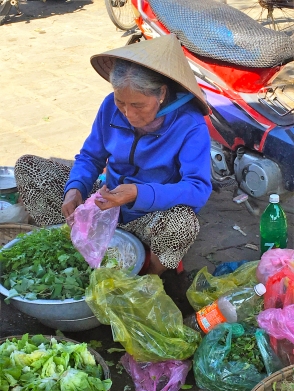 And since I’m hooking you up with an egg Bahn Mi recipe, here’s our Market egg lady!

Preheat broiler.
In medium bowl, toss together carrots, radishes, jalapeños, vinegar, and sugar.
Cook bacon and remove to plate to drain and cool.
Cut into halves.
Arrange bread cut side up on baking sheet.
Drizzle with bacon grease.
Top with salt and pepper.
Broil until golden, 1 to 2 minutes.
Top one half of each bread roll with cucumber slices.
Top with bacon halves.
Top with veggie mixture.
Cook eggs in skillet with remaining bacon grease.
Top veggie mixture with eggs.
Top with cilantro.

P to the S…I made this with sausage, since there was no bacon in my fridge. I also spread a bit of ricotta (flavored with fresh lemon juice) and additional veggies on the other side of the bread, just because!