Worth the effort…I PROMISE. You will be pleased as bourbon this winter when you make your vegetable soup, pasta dishes, baked chicken, and/or sauteed fish.  Don’t shrug this off; honestly, do it! This is THE simplest of all canning. Totally legit. It IS after all the season to “put up” summer produce, right?! I tweaked this recipe from Southern Living’s softback Little Jars, Big Flavors, featuring Virginia Willis. (Thanks Lou, for the intro to Virginia at Chapel Hill’s Southern Season!) So run out to your local produce stand or grocery and snatch those ‘maters up this weekend. 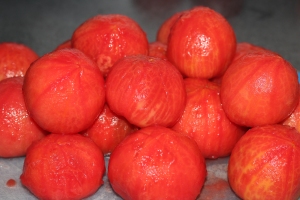 After the 60 second boil and ice water bath, they peel quite easily.

Proof that I used the Little Jars, Big Flavors cookbook. Thanks Virginia Willis!

The first several steps make it a cinch to peel the tomatoes.
Bring large pot of water to a boil.
Prepare an ice bath in large bowl.
With knife, cut a large x on bottom of each tomato.
Drop tomatoes into pot.
Cook 60 seconds.
Remove with strainer directly in to ice bath for 2 minutes.
Remove tomatoes from ice bath.

In the meantime, prepare jars and lids by boiling them 10 minutes in water bath.
When ready to fill, remove jars and lids from water.
Ladle tomatoes and juice into jars, leaving 1/2″ head space.
Place lid on jars, and screw rims on loosely.
Lower into boiling water bath.
Process in boiling water 40 minutes.
Remove from processing bath to counter top.
Listen for the popping sound, signaling a proper seal.
Allow to stand 24 hours untouched.
Label and transfer to dark pantry.
Good for a year.
Refrigerate after opening.

Ahhh…Dinner from a Father’s Day Basket with my Homemade Italian Tomatoes!